Skip to content
Affiliate Disclaimer: My content may contain links to products I use and love. As an Amazon Associate and participant in various other affiliate programs, I earn a small commission at no extra cost to you from qualifying purchases. I only recommend products I personally vetted!

I think they look cute, and you may too, but moles can be detrimental to your lawn and garden with their raised “molehills” which can undermine the roots of plants and can inadvertently cause damage or death to flowers.

Many people confuse moles for mice or rats, and even though they may look similar (they’re both small and furry), they’re very different creatures. Rats and mice can contaminate your vegetables, flowers, and plants and spread infectious diseases to humans and pets.

Moles however may look unsightly but surprisingly can be beneficial for your yard and garden. But if you still want to get rid of moles in your yard for good, the good news is that there are several ways to do so including eliminating their food sources, applying a repellant, and the easiest method by keeping your lawn tidy.

Moles are small mammals that spend roughly half their life underground searching for food. They quickly burrow lawns and create an intricate network of tunnels, which when left unattended become more difficult to control with pesticides or other control methods.

Moles do not have good eyesight, but what they lack in that department they make for is their sense of touch. In fact, some species of moles can dig out a 160-foot burrow in a single night. However, on a brighter note, moles do not eat plant roots but just tunnel around root systems to locate worms and other insects.

Are Moles Beneficial to Your Yard?

Before implementing the methods to keep moles at bay or even using dish soap or dangerous pesticides to get rid of them completely, it’s worth noting that moles can actually be beneficial for your yard, and here’s how.

Moles mostly eat grubs including white grubs and beetle grubs, which are undesirable because grubs munch on the roots of your beautiful lawn grass.

Adding to this, moles surprisingly aerate your soil by digging deep tunnels and straight tunnels underground and loosening the clumps of soil during the process.

How to Identify Mole Damage in Your Yard?

A mole is not a common lawn pest but there are some sure-shot signs of mole damage on lawns including:

Since moles can damage the roots of grass, mole damage on lawns can cause patches of dead grass on your lawn. As moles move the dirt to create their tunnels, they can disrupt nearby root systems, killing the grass at the surface level.

However, you will have to investigate this further because patches of dead grass can also be caused by poor soil issues, urine from pets, and wildlife.

Moles are billed as burrowing animals that dig every day. When they dig a tunnel in your lawn or colorful flower bed, they displace mounds of dirt upwards to create molehills.

Molehills don’t emit any strong smell and aren’t a type of poison bait for other insects but they are an eyesore and should be cleared before mowing the lawn.

When a gopher digs through your yard, it pulverizes the soil into a smooth powder, but moles contrarily dig up lumps of dirt. Therefore, clumps of soil indicate a mole issue.

What Attracts Moles to Your Yard?

Moles crave a diet consisting of grubs, earthworms, snails, beetles, slugs, spiders, centipedes, and other types of insects and bugs. So, if you have these bugs in abundance in your yard, moles will be attracted to their favorite food source.

You may feel that cooler temperatures will get rid of moles in the yard but that’s not the case. These mammals don’t hibernate during the winter but remain active all winter long. They stop digging surface tunnels and instead dig underground tunnels that are below the frost line.

How to Get Rid of Moles in Yard Once and For All?

If you’ve got a mole problem, there’s no need to break a sweat just yet because there are several ways to reclaim your yard.

1. Get rid of the food sources

I mentioned earlier that moles dig up your yard to feast on grubs so it makes sense that getting rid of grubs will get rid of mole tunnels and moles, but this may not work as intended. Getting rid of grubs may not keep moles at bay and these mammals will be forced to dig more tunnels in a hunt for food.

But that’s not all, they may prey on beneficial insects such as earthworms if grubs aren’t available, so grub management isn’t always an effective solution to eliminating moles from your yard.

However, if you have a large grub infestation in your yard, it’s best to take the necessary steps to get rid of it because it will cause more damage than the moles’ will.

The natural method to kill grubs is with a mixture of dish soap and a quart of water. Simply, mix the dish soap with a cup of water and spray on the grub population. Grubs also dislike the scent of garlic and placing a few crushed cloves around your garden can deter both adults and larvae.

If you’d like to kill grubs without harming earthworms, beneficial nematodes, or soil bacteria, Scotts GrubEx is a great option. It works for up to 4 months after application and helps prevent root damage caused by insects. You can even spray milky spores to get rid of grubs on your lawn.

Still curious? Check out my detailed articles on When to Apply Grub Control? and the Best Grub Killers Reviews.

2. Apply a Repellant to Control Moles

Homemade mole repellants aren’t an effective solution to kill moles but can upset their digestive systems when they come in contact with them, making your lawn a less appealing place to call home.

The active ingredient in this homemade mole repellant is castor oil. Mix three parts of castor oil with one spoon of dish soap in a gallon of water. Next, use this popular mole removal method to soak hundreds of mole tunnels and mole entrances in your yard.

There are two types of commercial mole repellants available:

Liquid repellants are easier to spread with a hose-end sprayer but may be less effective than granular mole repellants.

It doesn’t emit any strong odor, making it great for people with a strong sense of smell, and is safe for people, pests, and plants.

There’s no shortage of granular mole repellants in the market starting with Molemax by Bonide. It is designed to repel moles, gophers, voles, armadillos, rabbits, ground squirrels, and other burrowing animals from lawns, ornamental gardens, and planting beds.

The granules contain castor oil and can be placed near tunnel entrances, unsightly tunnels, and active tunnels, and treat up to 5000 square feet and offer 4 months of protection.

You can speak to your local pesticide information center to see if any chemicals are available for mole control and mole removal if you have a mole infestation but this would be the inhumane way to go and may also be illegal in certain states in North America.

If you find mole repellents ineffective, you can try using a mole trap to do as their name suggests “trap moles”. Take note that mole traps are also an inhumane way to get rid of moles because the traps kill moles instantly, so use your moral compass to determine whether you want to go this route.

Mole traps such as the Garsum Plunger are pushed into the ground alongside mole tunnels near garden plants and gopher mounds and are triggered when the mole encounters the trap, killing it instantly.

It is made from 100 percent galvanized steel and features sensitive scissor-type jaws, which immediately catch and kill the mole when triggered by the slightest movement. 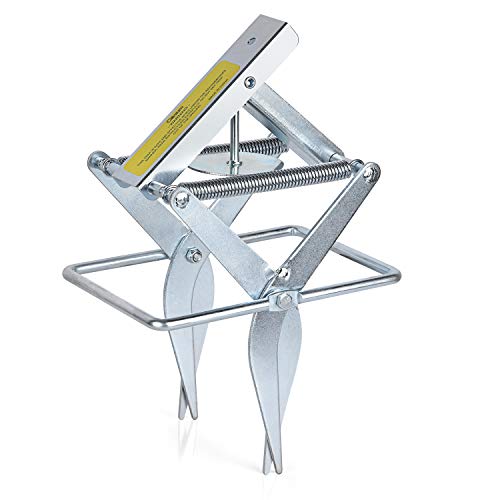 Ultrasonic mole spikes or sonic spikes in short are yet another effective way of deterring moles. They are mostly solar-powered and use high-frequency sound waves to chase moles out of a certain area.

They feature spikes at the bottom, making them easy to install and hold them in place even in moderately windy conditions.

The Careland mole repellant stakes are perhaps the best mole sonic spikes in its segment and emit sound waves for 2-4 seconds every 35 seconds, making them a great choice for repelling moles.

They are fitted with solar panels and rechargeable batteries, so you never have to replace the battery. The stakes are waterproof and easy to use, where you simply insert the stake near a mole hole and turn it on to deter moles. 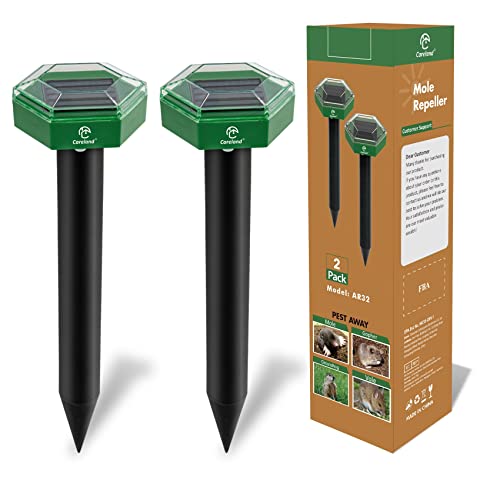 Mole baits are often shaped like their favorite food – grubs, and are non-organic, meaning they contain chemical poisons. Mole baits infused with certain ingredients are effective against the most common mole species and are ready to use right out of the pack. 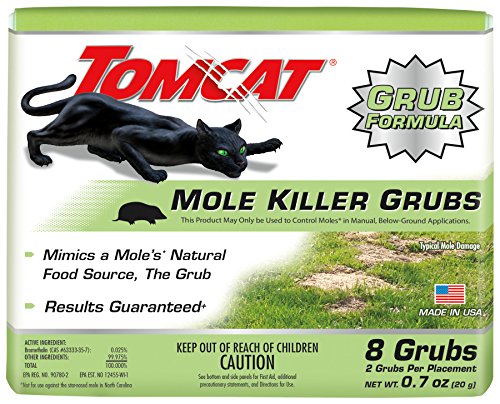 Here is additional information on how to get rid of moles in your yard:

How to Prevent Moles in Your Yard?

They say “prevention is better than cure”, and there are some things you can do to prevent moles in your yard.

When it comes to ways of preventing moles in a yard, the irrigation and drainage system are often overlooked. Moles are attracted to moist areas especially areas over and underwater situations because these areas tend to be a hotspot for worms and nightcrawlers.

This is why it is highly important that you irrigate your yard at the right time, which in most cities and states is before 9 am. Refrain from watering when it’s raining as it may cause overwatering of your lawn.

Minimize the Use of Lawn Chemicals

A healthy lawn is a natural deterrent for moles because if no grubs and insects are present, then there’s no reason for moles to visit your lawn. Make sure your soil is tested and has the right pH level and fertility to ward off pests and diseases.

Moles aren’t just attracted to grubs and other insects but moles eat birdseed and other animal droppings. If you have bird feeders, make sure the surface below is clean at all times. You may even want to install a catch feeder underneath to make cleanup easy.

Moles in your yard aren’t necessarily a bad thing as they may help with several lawn care processes such as aerating your soil. However, there may be times when moles can become a big issue especially when they create unsightly mole hills across the surface of your yard.

There are a plethora of ways to get rid of moles in your yard including using a mole repellant and laying mole traps. It is however a good idea to check if mole traps can be legally used in your area as some states prohibit their use for moles and most other pests.