Skip to content
Affiliate Disclaimer: My content may contain links to products I use and love. As an Amazon Associate and participant in various other affiliate programs, I earn a small commission at no extra cost to you from qualifying purchases. I only recommend products I personally vetted!

Welcome to our weed identification directory. Below we will list the most common as well as uncommon weed types that you will typically find in southern and northern lawns. All weeds are either classified as grassy weed or broadleaf weed.

They say “prevention is better than cure”, and the best way to get rid of weeds is to prevent them from growing in the first place. But if you are already embroiled in a weed battle, then you should learn about the common lawn and garden weeds, and what killers to use on them so that you can get rid of them effectively.

Annual Bluegrass is a grouping weed that grows in bunches. The leaves are in the bud which gives it a fan shape which is pleasant to look at. The seedhead is triangular in shape and can spread via the wind or animals walking through it. This is a winter annual weed that is usually easy to pull out of the ground and will die off once temperatures are over 70 degrees at night.

Field bindweed is considered one of the most daunting weeds to deal with, as it is difficult to control. A single bindweed plant can span more than 10 feet in a growing season and can be rooted for many years in the soil.

Even though bindweed plant flowers are somewhat attractive, they can pose a big problem when they spread ruthlessly, generally in the late spring, and throughout the summer.

Bindweed is a common weed across the U.S., but rarely seen in the Southeastern U.S., New Mexico, and Texas. Just like most other noxious weeds, the best control for bindweed is prevention or early intervention. If bindweed has wound its way into your lawn, the best way to eradicate it is with a glyphosate weedkiller such as one of our recommended weed killers.

Spectracide Weed & Grass Killer can be sprayed on driveways, walkways, and around trees and shrubs, and other areas in your yard. This fast action weed killer shows visible results in less than three hours, and comes with a money back guarantee.

Common Chickweed (Stellaria Media) serves as a breeding ground for insects, pests and plant viruses, and can produce more than 800 seeds. Chickweed doesn’t grow more than two inches, and can be easily identified by its small size, and five white petals.

It tends to grow in moist, cool areas, and in a wide range of soils, particularly in neutral pH soils with high nitrogen. Chickweed is easy to control, as long as you get rid of the weed when the plant is small, and before it flowers.

Once you pull the chickweed directly from the soil, you should aerate the soil using an aerator or shovel. You can also eradicate chickweed with a herbicide such as Bonide Weed Killer or Ortho Weed B Gon Chickweed, Clover & Oxalis Killer.

Also known as Couchgrass, Quackgrass is a troublesome perennial grass that thrives in relatively cool, moist climates. Couchgrass is claimed to be one of the three most serious weeds, because it infests more than 35 crops in over 65 countries.

Quackgrass can be killed with a non-selective herbicide that contains the active ingredient Glyphosate. However, it is important to note that even though Glyphosate kills Quackgrass, it can also kill desirable grasses. So, it is best to use an organic weed killer such as vinegar to kill Quackgrass.

Household vinegar however won’t kill Couchgrass, so you will have to step it up a few notches with an industrial-strength vinegar concentrate such as Natural Armor Home & Garden Vinegar to get the job done right.

Stemming from Europe and Asia, Canada Whistle is regarded as a “tough weed that just won’t quit”, because this creeping-root perennial, designated noxious weed in over 43 states is difficult to control. It can be easily identified by its broad, spear-like leaves, extensive rootstock, and ridged and hairy sterns.

Canada Thistle can flourish in a wide range of moisture conditions, and typically crops up during springtime. It can be effectively treated with certain herbicides such as Triclopyr 4 EC applied over a course of one to two years depending on the level of thistle infestation.

Triclopyr 4 EC is easily absorbed by Canada Thistle’s extensive and deep root system, making it easy to treat. You can also mix Triclopyr 4 EC with glyphosate for quick and effective treatment against almost any target weed.

Also known as Finger-Grass and Fonio, Crabgrass weed is often considered lawn pests, and is aptly named for its ability to grow low to the ground with stems protruding from the center, resembling crab legs. This opportunistic annual weed is fairly easy to manage by mowing your lawn regularly, as long as it has not set seed yet.

Crabgrass does die at the end of each growing season, but on the downside its seeds can remain viable for at least three years in the soil. If you only have a few Crabgrass plants in your lawn, you can simply pull them out by hand using a digging knife or hand trowel.

But if it has taken over your lawn, you should treat it with a strong product such as BioAdvanced Weed & Feed Crabgrass Killer. It is designed to kill crabgrass as well as other grassy weeds, as well as strengthen your lawn by fortifying it with the right nutrients.

I wrote up a good guide on the differences between Dallisgrass vs. Crabgrass. Take a look at that guide on how best to control Dallisgrass.

If you have Oxalis weed taking over your lawn then the best product to get rid of it is called Change Up by NuFarm which is a broadleaf herbicide.

Lawn Burweed is a nasty little warm-season weed that has burs on them which when animals or humans come in contact will pick up the burs and then transfer them elsewhere so they can continue to spread. It’s best to pre-treat for Lawn Burweed by applying pre-emergents so they don’t grow in the first place.

This is a tough little weed that just won’t die. Even spraying with Roundup has a hard time getting rid of it for good. You can control Virginia Buttonweed with a product called Blindside. 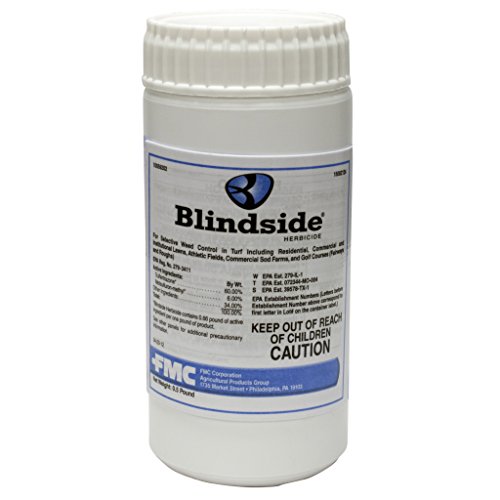 Affiliate links and images pulled from the Amazon Product Advertising API on: 2023-01-30

You can also use Blindside to control Kyllinga weed.

Kyllinga weeds have soft but prickly leaves that are usually green and spiral around a tall stem with small white flowers blooming at its top. These flower spikes open up easily in the morning hours or whenever it rains.

How to Control Wild Violet Weed

You can control Wild Violet with products that contain Quinclorac.

Wild violet is a common weed. A mere glance and it can be easily mistaken for the fragrant violets that are commonly used in garden landscaping. Wild violet grows close to established plants, with breads their seeds on wind carries away from the parent plant- making them hard to keep at bay!

How to Control Creeping Charlie Weed

Creeping Charlie is one of those pesky weeds that spread rather quickly and is a pain to control once it starts to spread. Do you know the green stuff that causes your garden to look like it has been attacked by a weed ninja? That is creeping charlie.

Also known as ground ivy, this evergreen weed thrives in shady areas and loves nothing more than getting it’s feet into the soil under what you believed was a healthy lawn. Like most weeds, control of creeping charlie requires multiple tactics. Turf providers can use grasses with deep root structures that work well with dry conditions and are not harmed by new varieties of creeping charlie.

How to Control White Clover Weed

White clover weed, also known as white Dutch clover or sweet vernal grass, is an invasive plant that can be found in the wild and in gardens. It is so hardy that it can grow well even with little water. The leaves are distinctive, with three heart-shaped leaflets per leaflet. White clover weed grows upright up to two feet tall and has small flowers at the top of each stem which blooms from March through May.

White Clover tends to grow in the spring in the south and tends to hang around over the summer if not treated. Learn how to kill clover in lawns.

Alternatively, check out my guide on the benefits of growing a clover lawn

Cudweed is a pesky, weed that can be hard to identify. Typically it likes to grow in shady aspects and next to trees near homes where there’s little foot traffic. Symptoms include green fluffy tops peeking out of high grasses and rocks, yellow flowers, and slender red-tipped leaves about 8 inches long that form an uneven lance shape with the leaf stem curving upwards at the end of the blade.

Broomsedge weed is a pesky annual weed that poses an enormous threat to soybean, cotton, and corn fields. Whether you have acres of crops or just a few tomato plants in your backyard, the difficulty in eliminating broomsedge creates frustration for farmers everywhere.